After leaving Skagway, AK our cruise ship headed back to Seattle, WA. We arrived at the port at 7:30am. Since our flight didn't leave until 11pm, we decided to rent a car and go to the Woodland Park Zoo. This is the best zoo that I have been to. I haven't been to many but they really made an effort to make you feel like you are walking in a rain forest or African safari. The containment's are barely noticeable except where they want you to see them. The kids had a great time. We had dinner and killed more time at Alki Beach on the west side of Seattle. Alki Beach is about as close to LA as you can get. We made the red eye back to Dulles Airport and arrived early the next morning. It was a fantastic trip and I encourage everyone to take one of the Alaska cruises if they have the time and money. For those who are not cruise people, the scenery will take your breath away and may change your opinion about cruises. However, I may never enjoy another cruise again. The bar has been set.
Posted by Father Of Twins at 9:47 PM No comments:

After visiting Skagway, AK, the ship cruised through the inside passage on it's way to Victoria, BC in Canada. Along the way there were countless whale spotting's which the captain made note of as we passed by them. Once in Victoria, our excursion took us on a tour of the old town and then off to Butchart Gardens. Butchart gardens began as a limestone quarry. When the owners had stripped the property of all of the useful limestone, they began to plant a garden in the space that was left. Eventually they sold it to a private company that developed it into a park. now they charge admission, have a restaurant, and gift shops to pay for the continual maintenance of the park. It's hard to believe looking at these pictures that it was once a limestone quarry.

Once back on the ship, we spent two days at sea arriving at Seattle, WA again on July 3.
Posted by Father Of Twins at 11:06 AM No comments: 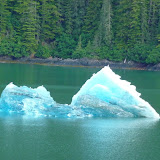 Our 5th day on the cruise took us to the Tracy Arm Fjord and Sawyer Glacier. The ship arrived at the mouth of the fjord about 5:30am. Since we had that stern cabin with the excellent view, we stayed on our balcony for the entire journey of about 2 1/2 hours. Winding between the mountains they navigated this huge cruise ship through the narrow passage dodging chunks of ice which after closer inspection revealed they were really glacier ice bergs and only the tips were showing! Along the way were breathtaking views of waterfalls, ice capped mountains, otters, sea lions, eagles, and the signs that prove the glaciers are really melting away. As the ship approached Sawyer Glacier it became evident that the glacier has receded a great deal. Clearly visible is the vegetation line and below it nothing but barren ice scraped rock. Two chunks of ice broke off the glacier while we were there.

We were glad we gave the girls the opportunity to see these glaciers. When they are older there will be nothing left to show their kids. However, they will be able to share the memories of seeing them as a child.
Posted by Father Of Twins at 9:41 PM No comments: 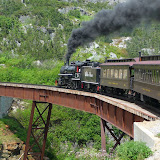 Our second excursion day took us to Skagway, Alaska. The town is known for their history during the gold rush era. The White Pass railroad was constructed to transport all of the "wealthy" gold miners in and out of the Yukon. Now the White Pass Railroad is the main attraction. Fortunately for us, our excursion day fell on a Monday and that meant we could ride the steam train instead of the diesel locomotive. The pictures show our 4 hour train ride through the white pass summit and into Canada. The scenery was breathtaking. They also served champagne at the summit and we had a toast to the gold miners that traveled through there so long ago.

After visiting the town of Skagway we headed back to the ship and watched a beautiful sunset. The following morning we arrived at Tracy Arm Fjord and the Sawyer Glacier!
Posted by Father Of Twins at 6:14 PM No comments:

Alaska 2010 Juneau and the Whales 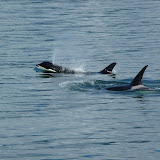 Our first excursion was to Juneau. First stop was to take a catamaran to Orca Point Lodge where we ate a fantastic salmon lunch and walked along the shore watching bald eagles soar overhead and wondering what was coming next.

Back on the Cat, we headed out to locate whales. Our first encounter was with several Hump Back whales. We then encountered two pods of Orca otherwise known as Killer Whales. Each pod had about 9 or 10 in each. The Orca were circling around a school of fish in order to pack them into a tight ball which makes feeding much easier. Some of them came quite close to the boat. Next we saw a group of Sea Lions playing king of the mountain on a buoy which was pretty entertaining to watch. Our last encounter was with another group of Hump Back whales. This time one came right up along side the cat and sprayed my daughter Carina. She was pretty excited about getting sneezed on by a whale!

Next on our tour was a stop at Mendenhall Glacier Park where we got to see glacier ice up close, beautiful scenery, and bald eagles. Amazing to see how fast the glaciers are melting. Back on the ship we had a fantastic meal and crashed for our next excursion the following day in Skagway.
Posted by Father Of Twins at 10:10 PM No comments:

Here are pictures from our first two days at sea on our way to Juneau, AK. We had an exceptional view from our balcony off the stern of the ship. If you ever take one of the Alaska cruises, try to get the stern balcony room. It costs more but it's worth it.
Posted by Father Of Twins at 9:52 PM No comments:

As I mentioned in an earlier post, we spent the first three days in Seattle, WA. Our journey took us to the Space Needle, Pacific Science Center, Ride A Duck (No tango with any barges), Tesla Motor Showroom to test their new all electric sport convertable, Pike's Place Market, Argosy Tour of the harbor, Seattle Aquarium, and the Science Fiction Museum where I got to see Capt Kirk's command chair.

Here are some pictures of our visit those 3 days.

If you can't view them here or would like to see more pictures of our trip you can visit this link: http://picasaweb.google.com/mytwinsfather

Stay tuned for more trip details and YouTube videos once I can get them converted.
Posted by Father Of Twins at 9:34 PM No comments: 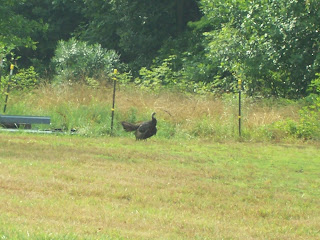 My neighbor Buddy caught this visitor in his front yard. Ben Franklin wanted this guy to be the national bird, the American Wild Turkey. I think I'm glad it became the Bald Eagle.

Posted by Father Of Twins at 9:03 PM No comments:

Back From Our Alaska Cruise 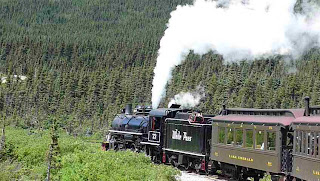 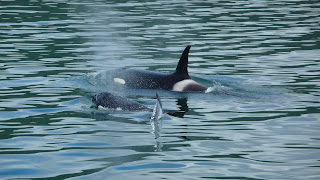 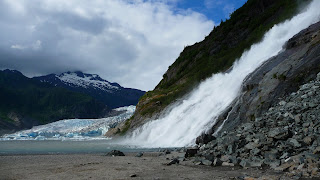 We are finally back from our trip to Seattle and Alaska cruise. The weather was perfect, mid 60’s most of the trip with one day in AK in the 70’s! Who would have thought? We spent three days in Seattle visiting the center of town including the space needle, Pikes Place Market, and other attractions before boarding our cruise on Royal Caribbean. Our ports of call were Juneau, Skagway, through the Tracy Arm Fjord to Sawyer Glacier, Victoria BC, and then back to Seattle.

In Juneau we went on a Whale excursion and visited Mendenhall Glacier Park. We saw many humpback whales and Orca. Carina even got sprayed by a humpback whale! The glaciers were beautiful but it’s sad to see the rate at which they are melting. The loss is clearly visible as chunks were just breaking away at the water.

They took the ship next through Tracy Arm Fjord navigating around icebergs where we spent about 45 minutes overlooking Sawyer Glacier and watching otters and sea lions trying to figure out what our ship was doing there.

The next port was Victoria BC which just happened to fall on Canada Day (Canada’s Independence Day). We took a tour of the city and visited Butchart Gardens just outside Victoria. The site was once a limestone quarry and was converted to a garden and sold to a private company that turned it into a park.

We then headed back to Seattle. Before we caught our red eye back to Dulles, we rented a car and visited the Woodland Park Zoo and Alki Beach west of Seattle. I took over 1200 pictures and about 30 videos on the trip which I am still sorting through. I hope to get them up on the site soon. It’s difficult to take a bad picture when the scenery is so beautiful. From minute to minute it changes and other things come into view. Now I have to deal with it all. Here are a couple of pictures I pulled from the disk.

Posted by Father Of Twins at 10:58 AM No comments: