Storm Wins Game #4 Against the Ravens

Storm took game 4 today with 1-0 win over the Ravens.  The girls played very hard against a team very good at stealing the ball.  Elizabeth scored the winning goal.  Way to go Storm!

To see the rest of this weeks team pictures go here:

Posted by Father Of Twins at 3:14 PM No comments:

This morning I went to Dulles Airport to watch the Enterprise take off for it's journey to NY.  When we arrived many people were already there including the press.  We took a chance and picked Garage 2 and we got lucky.  IAD decided to take off using runway 30 which was visible only from Garage 2.  20 some years ago I watched Enterprise come to the DC area and was able to see it up close at the Air and Space Museum Annex, now the Udvar-Hazy Center.  I bid it farewell and gave it a wave as it headed off to NY for display at Intrepid.

I spoke with a number of people and the predominant topic was why NASA ended the shuttle program without a replacement ready to go?  While we all feel a great sense of pride to see these orbiters paraded before us, it is with mixed feelings knowing there is nothing to replace them.  Our hopes ride on the prospects of commercial enterprises picking up the pieces to provide the services and the pride these orbiters gave us...yet we know in the back of our minds that nothing this great can be created "for a profit".  The future of space travel will not be written alongside large investment checks.  It will be because we resolve to do it for the sake of science, education, and humanity.
Posted by Father Of Twins at 5:26 PM No comments: 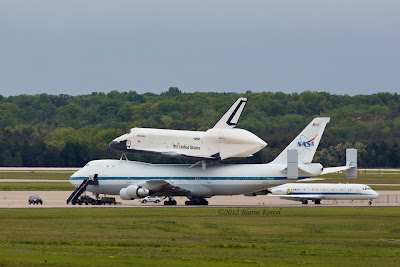 Enterprise is now sitting on the tarmac at Dulles International Airport waiting for the weather to improve. Officials are planning for a flyout possibly on Wed morning. I took this today at the airport on top of the garage.
Posted by Father Of Twins at 10:38 PM No comments: 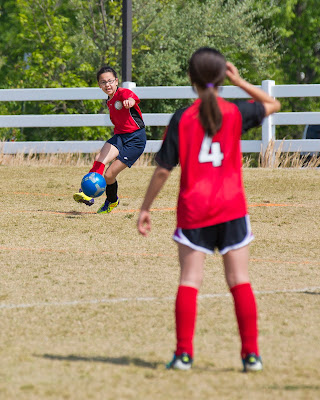 The girls have started spring soccer. Last Saturday was their third game. They lost 2 to 1 but not before my daughter scored the only goal of the game. I'm also trying to get caught up on pictures. Here is the link to last Saturday's game. I'll post games 1 and 2 later.

https://picasaweb.google.com/mytwinsfather/2012SpringSoccer3?authuser=0&feat=directlink
Posted by Father Of Twins at 1:22 PM No comments:

Today, a coworker and I decided to visit Discovery at the Udvar-Hazy Museum in Chantilly, VA. The shuttle was being exchanged with the Enterprise which will be flown to New York next week. When we arrived, the shuttles were parked nose to nose out on the tarmac what was an awesome sight to see. No where have I seen two shuttles together like that. After a few hours of taking pictures, they began the process of towing Discovery into the display hangar of the museum. The highlight of this trip though was getting two of my Discovery flyover pictures autographed by Astronaut Curtis Brown who flew 6 missions and was the Discovery Commander and Pilot on three of them, STS-85, STS-95, and STS-103. 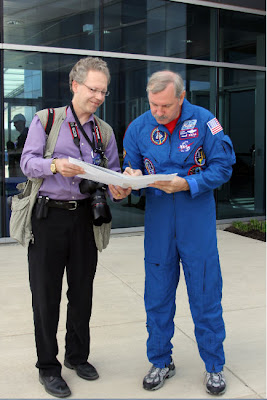 Here is Curt Brown autographing two of my pictures 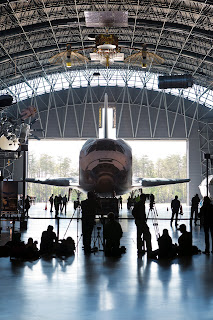 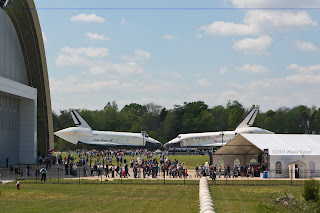 Enterprise and Discovery nose to nose for the world to view 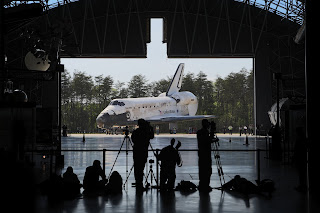 Here is Discovery being manuevered into position for display

Posted by Father Of Twins at 8:46 PM No comments: 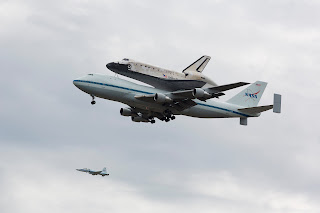 Today I packed the family and dog and went to Chantilly, VA to watch the Space Shuttle Discovery fly into Dulles Airport. We were told that the Target parking lot on route 50 was the best spot to be. It was indeed! We were pleased to be able see and photograph 3 low fly overs before landing at the airport. The 1st flyover was so low I swear I could feel the heat from the jet engines. The picture above was the 3rd flyover just before it landed. Next up is the transfer ceremony at the Udvar-Hazy museum where it will replace the shuttle Enterprise in the display hangar.
Posted by Father Of Twins at 8:31 PM No comments: