The strongest storm in some time just whacked the Washington DC area.  Winds around 75mph snapped and uprooted trees.  Several people were killed in the area from falling trees hitting cars and homes.  Power at our house was out for about 17 hours.  Considering the damage, Dominion has so far done a good job.  I can say that because I now have AC!  ;)  Others may think differently.

As the storm approached, I set up a camera on the front stoop and tried to get some pictures of the lightning.  This was the best shot. It shows the lightning coming from the west, down toward the house, looping back up and shooting off to the east.  The second shot shows the orange glow in the sky as a high voltage electrical tower burns near Lorton, VA killing power to much of our region.  More storms are predicted for tonight.

Posted by Father Of Twins at 6:40 PM No comments:

For fathers day I treated myself to a trip to Conowingo Dam near Darlington, MD to photograph Bald Eagles. There is a constant food source available and the eagles are resident year round. Today I saw no less than 30 eagles along with hoards of other waterfowl. By lunch time quite a few "locals" had arrived to have picnics with their fathers. One adult Bald Eagle landed in a tree behind me and stayed for 6 hours. Visitors were pretty excited to see one fairly close when I pointed it out to them.

To order these or other Bald Eagle pictures, please visit my Eagle link at East Wind Photography

Posted by Father Of Twins at 12:10 AM No comments:

The Girls Play at their Piano Recital Last Saturday

Posted by Father Of Twins at 8:12 PM No comments:

2012 Venus Transit Across The Sun 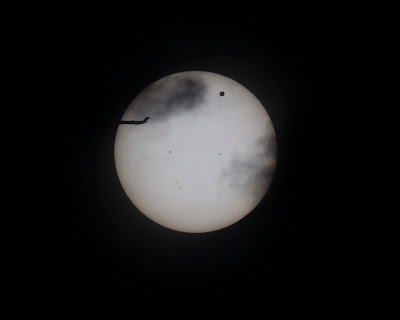 I've been waiting for this day for months.  The weather was looking good all day.  Today was the transit of Venus across the Sun (black circular dot in the upper right of the picture).  At 6:04pm when the transit was supposed to start here on the east coast, thick clouds moved in and it looked like we were going to be skunked again!  Come ON!  I'm not waiting around for another 117 years to get another chance!  I waited an hour on my front door step and still no breaks in the clouds. I decided that I needed to move down the street.  Maybe there were less clouds there.  So I picked up my camera, solar filter, and tripod and moved down the street to a neighbor's house that had a 12" telescope set up.  I was going to go over to the lake where there was a decent horizon but it looked like maybe we would catch a break (literally) and I didn't think I would have time to hoof it all the way to the lake.  Sure enough the clouds parted around 7:08pm and we got about 13 minutes of viewing time before a larger cloud deck moved in.  I took a number of great shots, the best one is shown here.  I wasn't fast enough to capture the plane in the center of the disk but I'm happy with getting it at all.  The perspectives here are wild if you stop and think about what you are looking at and the distances involved.  Nearly all of the shots have some clouds in the view but each one is uniquely different.  First glance reminds me of the day Voyager sent back the first images of Neptune and Uranus...although I don't recall ever seeing an airplane in the view.  I was glued to the NASA channel for weeks!

Well the kids didn't seem too interested in seeing this but I'm glad I got a picture of it.  Hopefully in time they will understand that you need to take advantage of these opportunities and most importantly to be patient.  117 years is a long time to wait to see it again.
Posted by Father Of Twins at 10:36 PM No comments: