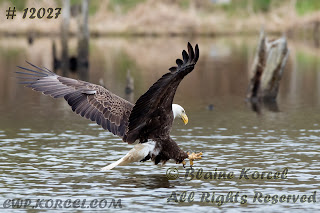 Amazingly, one of my Bald Eagle photographs has been selected for the final round in the NWF People's Choice Photo Contest.  Here is what is posted for this entry:

"I have photographed Bald Eagles for about 5 years and have seen a dramatic increase in the eagle population here in Northern Virginia.  Many eagles are transient.  However, we have many that nest and remain here year round.  "Overpopulation" along the bay, if you will, has forced many to nest inland and have become pretty tolerant of people and our activities.  Due to conservation efforts, the Bald Eagle in the lower 48 states, has recovered (doubled each year) to about the same numbers as there were when the Declaration of Independence was signed.  Lead poisoning continues to be a major threat to the Bald Eagle.

For this capture, I waited on the shore with my dog and gear for about 1 hour until this eagle flew in and made several attempts to catch this fish.  Three Ospreys eventually showed up and chased the eagle away. The moment before the "strike" is most intriguing to me.  Eagles MUST be successful as their livelihood depends on a continuous supply of food.

This image was shot at ISO 2000 on an overcast day.  I used a digital camera technique of overexposing by 2 stops but keeping the highlights at the very top of the in camera histogram.  I then pulled the exposure back down afterwards to reduce the noise and grain.  Additional basic corrections were performed to increase color and contrast balance."

It is an honor to be selected.  Final round voting begins July 23rd 2013 and continues through August 5th.  Please support my work by voting each day for my photo starting July 23rd.

If you are interested in ordering a print you can order it here: